There is a great irony in calling a perfume “Nuances” when, for the vast majority of its life, it has none. Such is the case with the new, limited-edition, super expensive, ultra exclusive, iris fragrance from Giorgio Armani called Nuances. It is part of the prestige Privé line, and the even more exclusive sub-collection called Les Éditions Couture. 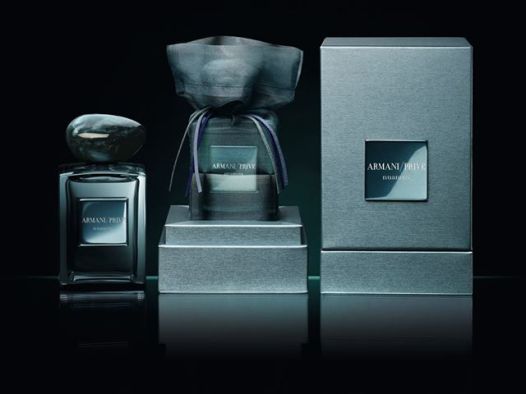 Nuances is an eau de parfum for men and women which was released in May 2013,  and which takes refined elegance to such stratospheric heights that it’s practically bloodless and gasping for oxygen. It made me think of a perfectly coiffed, elegant, eighty-year old dowager doddering away in seclusion on her aristocratic British estate; or of a very pale, elderly gigolo immaculately garbed in Armani who tries to fade as unobtrusively as possible into the background at a cocktail party while his current patron makes the rounds. Nuances is bloodless, simply bloodless. It’s just there — except when it’s not, because it’s decided to take off for a jaunt for and act like a ghost until it decides to grace you with its presence again.

But let’s start at the beginning. In typical Armani understatement, his website barely bothers to discuss the perfume in any detail other than a brief, completely unhelpful paragraph that bleats on about nuances, prisms, and the “juxtapositions of light and colour.” Thankfully, other sources don’t believe in his obsession with minimalism. For example, The Moodie Report says that the inspiration for the perfume was a piece of fabric, and explains how iris is the olfactory thread that needles its way through all three of the Armani Privé Couture fragrances:

The scent was inspired by an Armani fabric print, which featured in the designer’s latest fashion collection. The origin of the print was a photograph, taken using optical prisms and mirrors.

Each of the 1,000 signature bottles is dressed in the organza print; every pouch is unique, and adorned with leather ties. The lacquered green bottle is topped with a marble-like cap, in different shades of black, turquoise and anthracite.

The press release quoted by Harrods adds even further information and detail:

Inspired by this season’s fashion collection, Armani Prive Nuances is a brilliant reflection of the multi-faceted world of Giorgio Armani. Each of the 1,000 signature bottles comes dressed in the organza print, specially selected from Mr. Armani’s workshops in Milan. Within the pouch, the bottle itself is a work of art. Its cap, reminiscent of smooth marble, is crafted in three colours of resin making each one of them unique.

The fragrance uncovers a woody-iris accord, build around Italian orris absolute. A juxtaposition of different notes reveal an enveloping fragrance, sophisticated yet radiant, with a light note of androgyny in its woody base.

Armani doesn’t bother to list the notes for Nuances, but the sum total — as compiled from the Moodie report and Fragrantica — seems to be:

Nuances opens on my skin with a brief flash of bergamot, followed by iris. The latter is floral, rooty, earthy, and lightly powdered all at once. Within minutes, the iris is warmed by vanilla, but it is the louder, more dominant influence of vetiver which initially has the greatest impact. When combined with the iris, it creates an earthiness that feels almost like that of damp soil.

The iris keeps flickering and changing in these early moments. One minute, it is infused by fresh bergamot, the next by a light, musky vanilla, then by earthy notes. Once in a while, it feels infused by an amorphous woodiness. Generally, however, Nuances is merely different degrees of floral rootiness backed by vanilla.

The vanilla is interesting because it’s a very light, sheer, dry note, but whiffs of other elements lurk underneath. Something warmer, richer, softer and creamier. It’s not custard, cinnamon, or cocoa, but some indecipherable combination of all of them. A few minutes later, the vanilla is joined by heliotrope which adds a strong element of sweet almonds that almost borders on pate d’amande or marzipan.

At the thirty minute mark, Nuances starts to shift a little. Now, it is primarily a woody, musky, iris fragrance with lightly powdered, almond-y heliotrope and vanilla. The rooty, earthy undertones have become much less dominant, as has the vetiver. Taking their place instead is a light sprinkling of white cocoa powder with the faintest dash of cinnamon. Nuances remains this way for the next hour without any significant change — except in the base. It is always an amorphous, abstract, woody muskiness infused by vanilla, but there is something increasingly unpleasant about it. There is a subtle nuance that, in some indescribable manner, feels a little cheap and almost synthetic, but not quite. Perhaps, it is the musk which reminds me of the white version in a lot of inexpensive, mass-market fragrances. Or, perhaps, it is the vanilla which feels surprisingly low quality for such an expensive fragrance. Adding to the subtle flickers of something unpleasant lurking down below is a humming in the base. Luca Turin once described ISO E Super as a “low woody hum,” and that is precisely how it is here. Later, alas, my synthetic nemesis makes a far greater appearance, resulting in a charming 2 hour headache.

Right around the 90-minute mark, Nuances becomes a skin scent and, by the two-hour one, it is nothing more than a faded, muted, almost abstract, woody muskiness with a soft, lightly powdered, floral veil that just barely — barely — translates to iris. There are no concrete, distinct, individual traces of sandalwood, vetiver, cocoa, cinnamon, or anything else for that matter.

Then, three hours in, Nuances vanishes. I put my arm right to my nostrils, and sniffed like a man dying for oxygen. I sniffed like the very best German Shepherd K9 in a drug squad. Nope, caput, finito, basta. I thought to myself, “okay, so much for longevity,” and shrugged. Then, lo’ and behold, an hour later, Nuances decides to suddenly come back. I have no idea where it decided to go, or why it decided to flounce off, but it apparently decided to revisit my arm. A few of the Chanel Exclusifs like to play “ghost,” as I call it (31 Rue Cambon, I’m looking at you in particular!), and clearly, Nuances is the same sort of animal. But, once Nuances decided to stay, it bloody well wouldn’t give up! All in all, it remained — in a nebulous, abstract, musky, woody, slightly powdered, monotonous, faintly iris-y hum — for another 11.5 hours. Granted, I had to practically inhale at my arm like a rabid, frothing, deranged animal to detect it a lot of the time, but it was absolutely there, no question about it.

Normally, I would test a fragrance with these sorts of odd characteristics at least twice — but I really couldn’t muster up the energy for Nuances. It’s not just that the perfume gave me a headache at one point from the subtle flickers of ISO E Super in the base; it’s mostly because Nuances was driving me a little mad with its linear refinement. It is so well-coiffed, so perfectly smooth, immaculate, conservative, sophisticatedly dull and unobtrusive, it verges on the mundane. I kept thinking of George Hamilton or Giorgio Armani having all the blood sucked out and replaced by embalming fluids, until they lost their perfect tans and their lifeless corpses were propped up on a chair somewhere. In fairness, I think a hardcore iris addict would probably love Nuances. Of course, that assumes that they could easily and consistently detect it on their skin — something about which I’m highly dubious. Yet, I think even they would admit that there are, in fact, few nuances to the fragrance, and that it is rather limited in both depth and range.

All of this makes Nuances shockingly over-priced. Yes, I understand it’s not only Armani Privé, but also limited-edition with only 1000 bottles made. But it’s £500.00! Nuances is not listed at all on the U.S. Armani website, so if we’re to go by the current exchange rate, that’s $760! If you want to pay a small fortune for an iris fragrance with actual nuances, and which is just slightly less difficult to obtain, then may I point you in the direction of Ormonde Jayne‘s Tsarina from the new Four Corners of The Earth Collection? It’s a lovely, incredibly elegant, sophisticated iris scent with layers, and without the many, varied problems of the Armani one. Plus, Tsarina is cheaper, too. (Well, purely on a relative scale of things….)

As you can tell, I was not a fan of Nuances. If it were a $100 (or even $150) bottle of perfume, and you were a hardcore iris addict who didn’t mind a really conservative, boring, but elegant, iris soliflore, then I’d definitely recommend giving Nuances a try to see if the nonexistent sillage and peculiar longevity issues work out for you. As it is, however, then no. Simply no.

Cost & Availability: Nuances is a limited-edition Eau de Parfum that only comes in a 100 ml/3.4 oz bottle. I can’t find pricing in U.S. dollars, but it costs £500.00 or Swiss CHF 690. Nuances is shown on the International Armani Beauty website and on its UK Beauty site (where it is currently sold out). However, neither Nuances nor the rest of the Privé Couture line is shown on Armani’s U.S. website somehow. Plus, I can’t seem to figure out if you can purchase the perfume from the non-UK, international website directly, as I don’t see a button to click and put the fragrance into a cart. Armani has an Index Website listing with versions for Asia, Italy, Germany, Spain and elsewhere that you may want to use to see if Nuances is listed for your location. In the U.S.: Nuances will undoubtedly be sold at any Armani boutique that carries the Privé Collection line of fragrances. Outside the U.S.: Nuances is currently available at Harrods. I know it is available in the Middle East. Normally, I try to provide as many online retail links as possible, but in the case of Nuances, it proved to be a little hard. And, to be honest, I wasn’t very motivated.