Heaven! I rarely have that reaction to new, mainstream or non-vintage perfumes, but this one is sheer heaven. Imagine slipping into a warm pool of creamy custard. As you slide in, you’re surrounded by what is initially a sharp burst of super bright, crisp, fresh orange before — mere seconds later — it turns into the darkness of bitter Seville orange. As you lie there, enveloped as if in a cocoon, sinuous fingers of the darkest, most bitter earthy chocolate wrap themselves like tendrils around your leg. It’s like a fin above the water, while below a huge black shark lies in wait. Patiently. For about 5 minutes. That big monster black is actually a dark, resinous patchouli and balsam wood. It lies in wait, until it slowly rises to the surface. And BITES you! That, my friends, is Hermès Elixir de Merveilles. 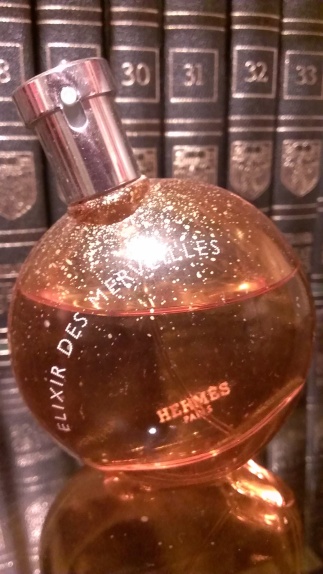 The “Elixir” (as I shall it from now on) was created in 2006 by the legendary nose, Jean Claude Ellena, and comes in a lovely orange bottle splattered with gold at the top and leaning partially on its side, off-kilter. It is an Oriental Fougère, according to Fragrantica, which essentially means that it has oriental notes mixed with woody ones. The notes are: peru balsam, vanilla sugar, amber, sandalwood, tonka bean, patchouli, siam resin, caramel, oak, incense, orange peel and cedar.

The key notes that you need to really pay attention to at first are the Peru Balsam, the Siam Resin, and the Patchouli, though the cedar and oak become significant later. Now, from my reading of Fragantica’s explanation, peru balsam is a type of wood whose essence has a cinnamon and vanilla smell. At the same time, it has a green olive base which exudes an earthier, as well as bitter, aroma. Resin is slightly different. From general reading, it seems resin is the dark, oozing secretions from a tree that differs from “balsam” mainly in terms of its form and method of preparation. Siam Resin is a type of dark, balsam-ic secretion from a particular type of tree in Thailand, and is supposed to be more smoky and dark than other types of resins. The thing is, both share some great similarities. Peru Balsam and Siam Resin both smell like sweet vanilla but Peru Balsam has a cinnamon aspect too, along with that earthy, bitter edge. In contrast, Siam Resin — which used to be burned as incense — is more smoky and woody. In short, Cinnamon Vanilla with bitter green earth -vs- Sweet Vanilla with smoky, incense and wood.

But let’s start at the beginning. The first sprays of the Elixir creates the most crisp, bright smell of pure orange imaginable. That lasts mere seconds before the orange turns very dark and bitter. Have you had true British marmalade made from real Seville oranges? Those are the oranges I smell at play here. Maybe 30 seconds in, there is an immediate transformation from oranges (of any variety, crisp or bitter) to a suddenly warm…. ooze. I say “ooze” because I’m not quite sure how to describe the warm, seeping, almost thick (but soft) feeling of molting caramel that has suddenly appeared. There is a touch of cinnamon, too.

That seems to be the opening salvo of the Peru Balsam but it’s not jarring. In fact, the perfume has suddenly mellowed into a very complex “whole” with layers and range but, yet, still a “whole,” if that makes sense.  It’s a full package where no-one thing perpetually dominates (except perhaps the bitter orange) and where you can smell numerous different notes all at the same time. And, yet, they blend together perfectly as one. Unctuous, creamy, rich and warm…. it’s like slipping into an enveloping custard bath.

At the same time, the Siam Resin is starting to make itself noticed. That custard bath has a vanilla element that is sweet, yes, but there is also smoke and incense. Smoky vanilla-orange with caramel and incense might lead you to say, “But…. that sounds so damn strange!” It also might lead you to think of food, especially when I mention one of the most obvious impressions from those opening notes: dark, black chocolate.

Yes, chocolate. My immediate first impression was Seville oranges coated in the richest but blackest, most bitter chocolate imaginable. And with a touch of salt on it too! (Do you see why I’m leading you into this very gently, Oh Reader who may hate food scents?)

Don’t worry, this is NOT a food perfume and most definitely not a dessert one. There are chocolate perfumes out there, but this is not one of them simply because of those notes which I said were so key earlier: the Resin, Patchouli, Oak and Cedar. In fact, there is absolutely NO chocolate in the Elixir! What you’re smelling is the Patchouli, a dark, bitter, dirty 70s-kind of patchouli in the best way possible. It’s not a modern patchouli because it has a bite to it. It has a definite kick, like that black shark lurking under the water.

The dirty, earthy patchouli gives this an edge, but it is really anchored in those underlying wood notes which bring an earthy, masculine, woody foundation to the whole perfume. Strong oak, aromatic cedar and the earthy, almost pine tree-like bitterness of the balsam tree make this a scent that is definitely not foody. Plus, it has that Hermès signature in its final stages that is dry. “Dry” in the sense that it’s not sweet, moist, crisp but… dry. It’s almost hard to explain. I’ve heard it time and time again about Hermès fragrances and, after having gone back to smell all mine (as well as my father’s colognes), I can definitely agree. But it’s a bit like Porn as defined by one of the Supreme Court Justices: you may not be able to explain what it is, but you know it when you see it.

The famous perfume reviewer, Luca Turin, supposedly called the Elixir “bon chic, bon genre” and said that its dry-down was “enchanting.” (See a comment from “Lisa.M.Kasper” on Fragrantica, here.) (I don’t have his book, so I’m taking her word for it.) She agrees with Turin, as do I. It absolutely is “bon chic, bon genre” which is a French phrase to describe someone in the “now,” who is chic, stylish and hip. And, yes, the dry-down absolutely is enchanting. It’s all majestic, big, dark bitter tree (almost like a pine tree at times), mixed with peppery incense, smoke, sweetness and spice and just a remaining hint of orange wrapped in dark chocolate.  It’s so unusual that it’s just… baffling…. at times.

If Hermès’ 24 Faubourg was Princess Diana’s signature scent, then this belongs to someone else. I’m tempted to say Audrey Hepburn: sophisticated under a sweet, gamine appearance but not a child. Warm and sexy, but not overtly sexy like Brigitte Bardot. Casual in appearance (no Princess Diana tiaras and dresses here) but always stylish. And with a definitely aloof side under that initial impression of warm approachability.

The Elixir has been called “bi-polar” and I think that is a perfect description for it. It really is bi-polar. How else to explain these enormous extremes? It has also been called extremely masculine. To the point that there are a lot of complaints on Fragrantica, wishing they could like this scent but it’s so masculine. I don’t know when woody or spicy scents became masculine but I don’t consider this one. Nor, for that matter, do I consider it feminine. It is most definitely unisex, and the failure to label it as such is nothing more than a huge mistake in my opinion! I have to wonder if those who find it so masculine went into it expecting an orange dessert or a fruit cocktail scent. If so, then yes, by their standards, I suppose that green pine tree and cedar make it “masculine”. (If you could only hear my audible sniff at that.)

I should confess that I have a terrible weakness for almost all Hermès fragrances (mens, womens, dogs and horses…. no, I kid. Only the men’s and women’s fragrances), but not all Hermès scents make me whimper and moan as I sniff my arm. 24 Faubourg definitely does. And Parfum d’Hermès used to be one of my signature fragrances, though I have not smelled it as its re-named persona, Rouge d’Hermes. But I dislike Caleche from my childhood memories of it and most definitely have not liked most of the Merveilles flankers. The Merveilles line consists of Eau de Merveilles, the original one from 2004, then the Elixir in 2006, followed by Eau Claire and, recently, the very latest, Ambres de Merveilles.

There is a lot of talk about the Elixir versus the original Eau version. I’ve smelled the latter, but I wasn’t particularly impressed. It’s pleasant and nice, but it would hardly drive me to buy a whole bottle. I smelled the Elixir, and promptly went out and did just that. It has a WOW and a POW that, to me, the Eau version does not. The Eau is fresh, airy, clean and zesty. It’s subtle, less warm, and perhaps more demure. I haven’t tested out the Eau beyond some cursory sniffs and sprays, so I can’t speak as to its dry-down or process of development, but I hear that the Elixir and the Eau become very similar towards the end. And it is said that the Eau also has that typically dry Hermès signature at the end as well.

I don’t think the Elixir is for everyone. If your preference is for light, crisp scents, for florals, or for fresh, natural, understated and unobtrusive scents, then I think you will find the Elixir to be overwhelming and you should stay away. Those of you who fear fruity smells and how they may turn on you, I think you should give this a test run. Because it’s not a true fruit cocktail perfume by any means; that strong woody, resinous foundation forbids it! But for those of you who want to feel like Audrey Hepburn, in her capris and ballet flats with an Hermès scarf wrapped around her, as she quietly strolls through a bookstore in autumnal Paris where the orange leaves have fallen all around and where there is a brisk smell of smoky winter in the air… then this is your fragrance.  Bon chic, bon genre indeed!

— Sillage:  Enormous at first but, on me, it becomes less noticeable about 3-4 hours in. On everyone else, I’d guess it would be pretty big.