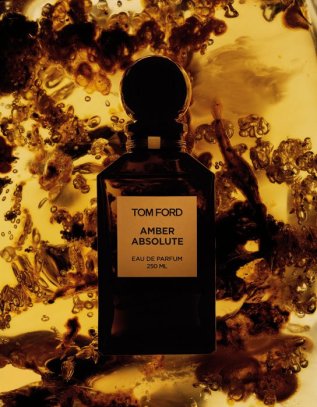 Absolute is one of those perfumes. While his entire line of fragrances — Private Blend or not — seems to have a very brash, forceful attitude, I think Amber Absolute takes it to new levels. It is known to be the most concentrated and the strongest amber perfume on the market, but it’s far more than just that: it’s also a frankincense monster. To be honest, it reminds me of one of the aggressive, giant gorillas in Planet of the Apes — complete with chest-thumping machoism. I am not a fan.

Amber Absolute is categorized as a unisex oriental eau de parfum. On his website, Tom Ford describes it as follows:

AMBER ABSOLUTE is a honey-colored scent infused with the purest form of Amber, joined by a tenacious refrain of African Incense, Labdanum, Rich Woods and a touch of Vanilla Bean.

There are no further details about the ingredients and no further elaboration of what kind of “rich woods.” Amber Absolute is intended to be a simple scent; it is meant to be little more than pure, concentrated amber with a “tenacious” hint of those other things. To that extent, you could argue that Tom Ford succeeded in his goal. It really depends on how you interpret the “tenacious refrain” part, and the extent to which the amber was meant to dominate.

Bois de Jasmin has an extremely useful discussion of amber in perfume, and I think it would be helpful to share it here:

While amber commonly tends to refer to the semi-precious fossilized resin, in perfumery, the word refers to an abstraction of the complex odors of ambergris. Rich, animalic, warm and salty, this substance regurgitated by the sperm whale, has been sought after since antiquity for its unique scent. Given its scarcity and high price, amber

accords have been devised using materials like labdanum, which approximate the fragrance of ambergris, particularly since purified labdanum contains ambrein, one of the materials that gives ambergris its scent. The classical amber accord in perfumery tends to be sweet and vanillic. The best examples I can offer include Serge Lutens Ambre Sultan, L’Artisan Parfumeur L’Eau d’Ambre and Annick Goutal Ambre candle .

I find it unlikely that Tom Ford used pure ambergris in his perfume, so I’m guessing the infusion of “the purest form of Amber” must be synthetic ambergris (or ambroxan) with a healthy, if not enormous, chunk of labdanum. In my Glossary, 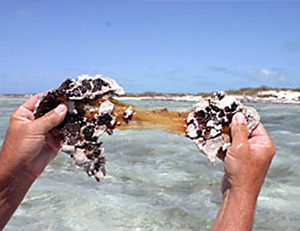 I elaborate on labdanum which is the distillation of the cistus plant and which imparts a dry, resinous, faintly woody smell. To me, labdanum is generally similar to ambergris (or to its synthetic form, Ambroxan) and to ambery resins. However, I think it has more of a masculine toughness as compared to amber’s sweetness, a touch more edge and a bit of a dirty, animalic spice.

Tom Ford doesn’t explain if his “African incense” is frankincense or what comprises his “Rich Woods.” The former must be Olbanum, and I’ve read some guesses that the latter consists of Guaiac Wood. I suspect that’s true. Descriptions of guaiac wood’s smell range from burning leaves and pepper, to rubbery rosy-sweet honey, to smoky, rubbery, tar-like asphalt. (See Glossary for more details.) All the descriptions apply here.

The reason why I’m spending perhaps a little more time than usual going over the notes is because I don’t find Amber Absolute to be a predominantly amber scent. To me, it’s smoky, peppery, almost asphalt-like frankincense fragrance first and foremost, and only then amber. Amber is merely the context and cocooning wrap, frankincense is the head and heart. And there is way too damn much frankincense!

Amber Absolute opens with a lovely note of spiced rum. It’s all Chinese Five Spice, headed by star anise. I cook with star anise, and was surprised by just how redolent the smell is here. The amber is rich and so boozy, I immediately thought of Captain Jack Sparrow in the “Pirates of the Caribbean” series and his love of rum. Here, the rum note is so concentrated, a mere whiff might make the mighty pirate drunk.

The frankincense is visible too and, initially, it isn’t quite the star player, though it is jostling for the center stage. It’s strong, smoky and has the sharp bite of black pepper. It’s faintly acrid; I can smell it at the back of my nose. There is also a definite burnt asphalt smell which can stem from either the possible Guaiac wood element or from the incense alone. Whatever the cause, the incense or frankincense notes become stronger and stronger. And stronger. It ends up becoming the olfactory equivalent to assault and battery, a most intentional tort.

It is such an aggressive assault that I should point out the need to be extremely careful in how much Amber Absolute you apply. Be careful for your own sake, never mind others. I thought I had been careful, but apparently, not enough. As I repeatedly state, my body consumes perfume. Consequently, for any sort of accurate test, I always use about 3-4 dabs from the small sample vial, smeared up and down each arm. That is the baseline. However, with Amber Absolute, I used far less. I know from prior experience the strength of Tom Ford scents — especially in their opening salvo — but I had also read enough about how Amber Absolute was the strongest amber on the market to know I had to be careful. So, I only put on 1-2 dabs on each arm. Oh boy!

It was absolutely tolerable — nay, lovely — in the opening 15 minutes or so. There, it was a mix of boozy amber (verging on seriously concentrated rum), star anise and spices with an element of frankincense. But the frankincense muscled the supporting players off the stage, took over, and then set up a chest-thumping rhythm of increasing shrillness. What happened to a mere “refrain of African incense”? Oh, right. “Tenacious.” Mr. Ford, I think you’ve confused “tenacious” with obnoxious.

As my prior reviews show, I’m a huge fan of frankincense, so it should tell you something that I found it really too much here. Isn’t this supposed to be an amber scent first and foremost? Frankincense and amber are a lovely combination but, here, there is nothing to really dilute, soften and tame the hard, extremely smoky, almost acrid (and verging on painfully sharp) edges.

Which brings me to my real problem with Amber Absolute: it is not well-rounded for a large portion of its lifespan. It’s too top-heavy on one key note. It’s unbalanced and, unbalanced to such an extent, it clearly must be intentional. I can’t fault Amber Absolute for being a simple, even linear scent; that was what they wanted it to be. But I can absolutely fault it for being painfully unbalanced.

Speaking of linearity, it’s not always a bad thing. I certainly don’t use “linear” as a constant negative. Nor do I need for my scents to always morph and transform like Cinderella. In fact, comfort scents like rich, warm, cozy ambers are one category where I can very much enjoy linearity. It’s akin to having the lovely basenotes (sometimes, the best part of a perfume!) there from the onset but just in different degrees of concentration. But I don’t like this linear perfume.

After three hours of being assaulted and beaten up by frankincense, the charging gorilla decides he’s got better things to do and goes to sit in the corner. The dry-down starts, and it’s a relief. There is salty caramel, vanilla and more of what I consider to be real amber. Soft, nutty, sweet and delicious. The salt of the caramel is balanced by the sweetness, and the whole thing has a lovely touch of smoke. The frankincense is still there, but it’s glowering from the corner and shackled. It’s been tamed enough to almost smell a bit like dirty patchouli, but not quite. The combination is lovely but it’s faint. Like most Tom Ford scents on me, the opening salvo is loud and intense, but when it fades into softness, it’s almost too soft.

Which brings me to something that I often wonder about when it comes to Tom Ford fragrances: olfactory fatigue. I don’t think I experience it with other lines, but I often suspect it is a factor with Tom Ford scents. Most of them open with such an enormous (if not overwhelming) blast that I wouldn’t be shocked if my nose tuned things out after a few hours. I’ve read mentions of olfactory fatigue when it comes to Amber Absolute in particular, so I suspect my assessment of the length or power of the dry-down phase may be strongly influenced by fatigue. Don’t get me wrong, it’s a linear scent even then, and there really isn’t a hell of a lot to write about how it unfurls at this stage. I simply am not sure of how strong it is at this point because my nose has been barraged in the preceeding hours.

All in all, Amber Absolute lasted about 8 hours on me with the projection being very good for the first 3 hours, then closer to the skin for the remainder of the time. Given how quickly my body consumes perfume, 8 hours is a long time. On others, however, I have read reports of Tom Ford scents lasting 12-18 hours, and I suspect that Amber Absolute would push things to the higher or highest end of that range.

All in all, I didn’t hate Amber Absolute, but I certainly didn’t love it. I had really expected that I would. In fact, from all that I had read about it and from a friend’s experience with it, I had expected it might be “The One” as far as amber scents go. I have thought long and hard about whether disappointment and very high expectations have contributed to my negative impressions of the scent. I don’t think they have. I’m not judging this as an amber perfume because, on me, it wasn’t one. At least, not a real amber. I’m judging this as a predominantly frankincense perfume in the cocoon of amber. And, even as a frankincense monster, it is not a thing of beauty. For a large portion of its run, it’s not even a thing of comfort. It feels slightly insolent in its extremely aggressive, chest-thumping swagger as it announces: “I’m here! I’m the strongest amber around. And I am absolute!”

So, my hunt for the perfect amber goes on. Maybe it will be Hermès’ Ambre Narguilé from its Hermessence collection, or maybe you can suggest something that I should try. Have you found your perfect amber? If so, what is it? I’d love to hear your thoughts on either Amber Absolute or the best amber that you’ve encountered thus far.

Cost & Availability: $205 for a 50 ml/1.7 oz bottle or $495 for a 200 ml/8.45 oz bottle. In doing a search today for all sites selling Amber Absolute, I came across a claim that it was just discontinued two months ago, in October 2012. I can’t seem to ascertain the accuracy of that comment. Certainly, Tom Ford’s website has the perfume listed as part of his Private Blend collection. However, I can no longer find it listed on the Nordstrom, Bergdorf Goodman or Neiman Marcus websites. Neiman Marcus has it listed, but the category is empty and without a picture of the bottle. Barney’s does not appear to carry any of the Private Blend line, so that’s no help. I’m extremely surprised given the enormous popularity of Amber Absolute, but I’m starting to suspect that chap was right and maybe the scent has been discontinued. If you’re eager to try it, though, there is always eBay where Amber Absolute is plentiful. And, of course, Tom Ford’s website, for now at least. If you like amber, I suggest trying out a sample which can be found for $3 on Surrender to Chance, or on other decant/sample sites like The Perfumed Court.