Happy Sunday! I thought we’d take a relaxing break from serious subjects with a little travelogue. Specifically, a detour into some of the culinary aspects of my recent holiday, with photos of the locale thrown in. I had originally planned to do this at the end of my article series on different Paris perfume houses and boutiques, but it seems that that is going to take quite a while, especially if I toss in mini-perfume reviews in some of them. So, I thought I would stagger out those articles, intersperse them with more traditional perfume reviews, and take an occasional detour in-between.

Since some of you think I’m torturing you with delayed, dangled promises of French food porn, I thought I should get straight to it with photos of the first part of my trip in Camargue, the region near the South of France and Provence. (If you missed that post and an outline of my trip, you can find the details here.) In a nutshell, however, I went to Camargue as part of a reunion hosted by two friends who were at university with me and who later married. Their guests were friends on both sides, many of whom they’d known going back to their respective childhood or high school years. All of us are sprawled out around the world, so it was a rare chance to catch up and reconnect. I spent time with a few people I’ve known since I was 12 years old! A few others I hadn’t seen in more than two decades, while others were completely new to me, and were a lot of fun to get to know. The main thing was for us just to spend time with each other, but my hosts are also serious foodies, so we were treated and spoiled with a few gastronomic delights.

Some of the following photos are merely scenic, encompassing such things as the famous Camargue horses, the French cafés in that small town of Aigues-Mortes, as well as some of the shops, menus, the Provence lavender that always tortures me so, Savon de Marseilles, or various other things that caught my eye. The vast majority of the photos, however, show the actual food, with the main focus being on a big feast held on the beach one Sunday afternoon. 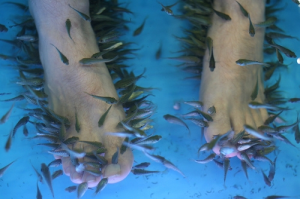 Then, there is something that I couldn’t resist taking photos of, namely, a fish pedicure I saw a husband and wife experiencing. Some of my friends later forced me into getting one with them, despite my screams at the horrific visuals involved. (I shudder all over again when I see my photos.) I admit it eventually became almost meditative and soothing; then again, I might have been in a slight fugue state at the thought of minuscule things eating at one’s flesh. Still, if you can imagine three guys and three girls basically shrieking their heads off at first, you’ll have a good sense of how that experience began. (Okay, I lie. One guy wasn’t shrieking at all, but that’s because it was his nutty idea to begin with!) If the photos below don’t put you off, there is a French blog post with pictures showing the exact place I went to in Aigues-Mortes, and showing the big smile on one chap’s face as he sticks his feet into the mini tank. You can also read up on the Garra Ruffa fish from Turkey (also called Doctor Fish), and why they’re the choice for this completely unusual way to get a pedicure.

So, first up in terms of photos is the medieval town of Aigues-Mortes which dates back to Gallo-Roman times, and which later became significant during the Crusades. It is a tiny place fortified by a huge wall and with a tower at one end that served as a state prison, first for the Knights Templars when their star fell, and then as a prison for the protestant Huguenots. There is even a sign commemorating the 200th anniversary of the Huguenots’ liberation. Aigues-Mortes has charming cobbled stones and numerous quaint cafés, but it was the Camargue horsemen who really caught my eye. Some of the flavour of Aigue-Mortes in thumbnails that you can click to expand in a slideshow: 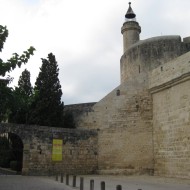 Part of the old 12th century tower and prison.

The Bicentennial in 1968, commemorating the release of Huguenot prisoners back in 1768.

Close to the hotel where we stayed.

A café near the main square where people would idle for hours.

One menu of the hotel’s café. 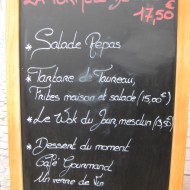 Another menu. Notice that bull or “Taureau” is listed.

A breakfast special at another café. 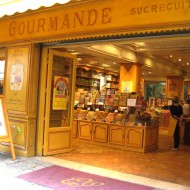 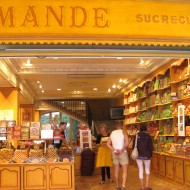 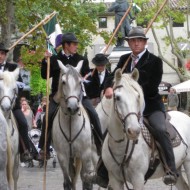 Camargue horsemen. I believe this group was part of a wedding party.

My camera made this poor Camargue horse into something a wee bit demonic looking, I’m afraid. 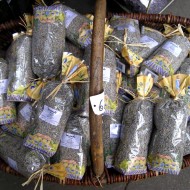 The Provence Lavender that plagues me, only here it’s super-sized!

The lavender of my nightmares, in XXL!

Not my feet! And Ugh at the fish.

Not my foot. A close-up of the fishies eating some poor woman’s feet.

On the Saturday of my visit, there was an outdoor lunch at a café with a buffet selection of various things, including the best pizza I’ve had in eons. Everyone else agreed, too; it was unbelievable! There are no pictures of it simply because every time I tried to get near the damn platters, it was gobbled up by someone. There certainly was no time for something like a photo. This was dog-eat-dog by some seriously starved people in a wild frenzy! The pizza was wafer thin, with lots of cheese, and possibly a hint of basil. I can’t remember much else of what was on it simply because I barely got to eat it; the one small sliver I finally managed to get my hands on, I had to practically inhale lest someone grab it from my hands! There were also huge platters of roasted pork, beef, deliciously roasted potatoes with garlic, and assorted Mediterranean vegetable dishes.

I ignored much of the food that afternoon, perhaps because I became fascinated by the wild, crazy accordionist whose energy levels would have stunned — stunned! — the Energizer Bunny. His almost frenzied performance (which went up, and up, and UP in intensity, and which lasted for over 2 hours almost without a break) became the subject of intense discussion with some my friends. Several were convinced that he had to be on drugs because no human being could possibly be that way normally. All I know is that the man knew every Edith Piaf song every made and, more importantly for me, Dalida, whose music I grew up to and whom I still adore. (She was a huge global star, a sultry sexpot, the iconic equivalent of Maria Callas with the approachable warmth of Judy Garland, and someone with a very tragic life who died young. As a side note, I was overjoyed to hear that they’re now making a movie of her life!)

While the food that day was a blur, I definitely remember the time I was served “toro” with a very complicated crudité salad. I kept digging into it, looking for the tuna sashimi, and being utterly bewildered by what I was tasting. It took me a while to realise they didn’t mean “toro” as in sushi, but as in “taureau” or bull. The Camargue region is famous for its black bulls, so it was featured on the menu of a lot of places. One evening, a big haunch of it was carved up for the group and I must say, I wasn’t very enthused. It’s not only that I have a weird protective feeling about bulls stemming from my undoubtedly illogical perceptions of Spanish bull-fighting, but also, the texture was tough as hell. Perhaps it was some smoked version, I don’t know. You can see the photo, and take a guess. All I know is that Bull is not my cup of tea. I was much more impressed by the lamb we had one evening which was smoked under a giant glass dome. 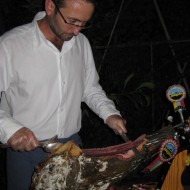 Carving the haunch of bull.

Menu for the lunch 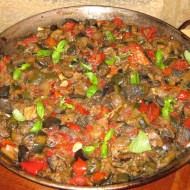 Inside of the café. We were all outside.

Adding a dry, smoked touch to food using a chef’s cloche. Photo: my own.

Once the storm clouds blew in.

The real pièce de resistance was the amazing feast we had on a secluded, hidden beach at St. Maries de la Mer, the capital of the Camargue region and a bus trip away from Aigues-Mortes. It began as a lovely sunny day, though as you may remember from photos in my prior post on Camargue, it didn’t quite end that way. But the food was spectacular. From a gigantic, whole tuna, and rough-style pork paté presented in a really eye-catching manner, to various sundry seafood delicacies, a variety of cold salads, another whole fish whose type I do not recall (but it was a white fish this time), an enormous bowl of Riz de Camargue (the special red rice which the region is known for), and some amazing desserts. If there is one regret I have from this trip is that I did not eat the mousse au chocolat, despite it being one of my favorite desserts, simply because I had eaten too much of the tuna. But when you see the photos, you will probably understand why. 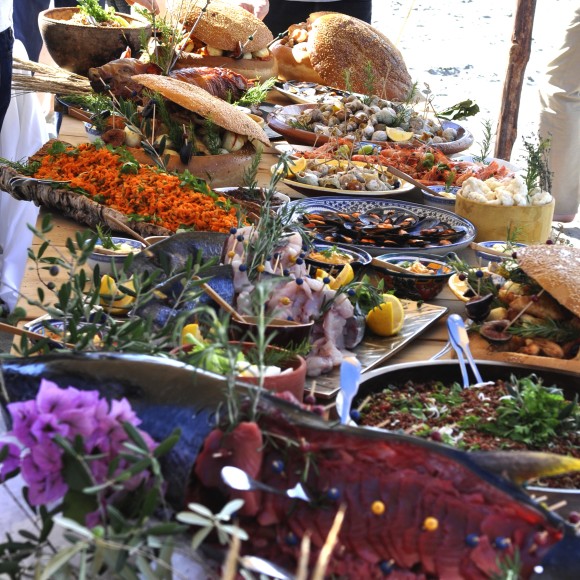 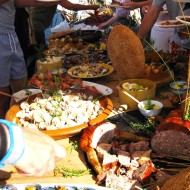 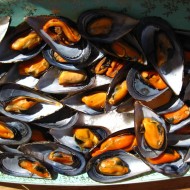 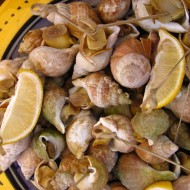 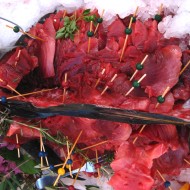 Some sort of sea snail type of thing, I guess. I didn’t like the method of preparation very much. 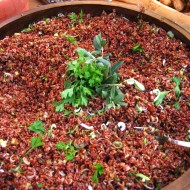 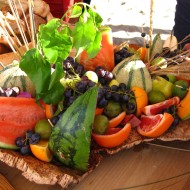 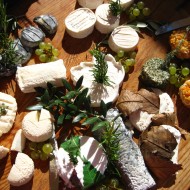 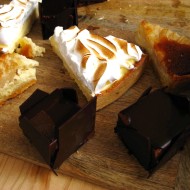 Cream puffs Sunday on the beach.

Later that night, at a very casual dinner held elsewhere, there was more delicious food, this time primarily Italian in nature. Honestly, I was too overcome to do anything but take two half-hearted photographs of some of the desserts (shown at the end of the series up above). I couldn’t manage a single bite of anything! Generally, I don’t eat much to begin with, and I’d probably consumed more at that lunch on the beach than I normally do in a few days while at home. So I merely ordered a series of double expressos, and collapsed in an utterly bedraggled heap on a sofa in the corner. Most of my friends were similarly sleep-deprived and, in a few cases, continued to suffer a hang-over from the night before. (One just gave up and slept on his wife’s lap throughout the whole evening.) Four double expressos later, I finally managed to drag myself back to the hotel, where I packed for the departure the next day for Paris.

There, cheese markets and chocolate shops awaited me, along with the city’s glorious architecture, the sight of lovers kissing near museums, romantic cafés, bridges festooned with locks in a symbolic gesture of committed love, the elegant gardens of the Tuileries and the Louvre, and so much more. Many of those things are featured in Part II of this series, which is an ode to Paris and is already up. Part III will be devoted solely to the food, and should be posted in a few days.